20,000 Leagues Under the Sea Nautilus 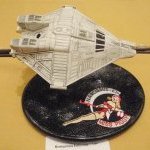