Canada's getting a new FWSAR aircraft (finally). Too bad it's the wrong one, 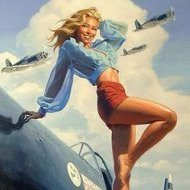 By Raceaddict,
December 7, 2016 in General Discussion